From an announcement in the middle of the night, to a rap video featuring a social media star, the unveiling of Paul Pogba by Manchester United broke new ground.

The football transfer ritual is a familiar one in the weeks leading up to the start of the Premier League season. Clubs compete to spend their ever-swelling riches on new players that can both improve their teams and enhance the global lure of their brands. Such fevered horse-trading usually forms part of the background noise before the real action kicks off on the pitch. This week, though, one transfer made headlines around the world.

Paul Pogba’s move to Manchester United from Juventus, announced on Tuesday (9 August), was a remarkable story – and not just because of the world record £89m fee. The deal saw a marketing operation kick into gear unlike anything previously seen in sport.

Social media has come to play an increasingly prominent role in the way that clubs like Manchester United communicate with the outside world, but the Pogba deal confirmed it is now the primary channel. Rather than opting for the traditional press conference and photo shoot, the club announced the transfer on its social media feeds at 12.35am – a decision that perplexed its UK fans but served the dual purpose of making the early morning news in the Far East and evening headlines in the USA.

The entire unveiling was meticulously planned by United, from online videos of Pogba arriving in the UK by private jet and touring the club’s training complex, to specially designed branding and photography of the player and a #POGBACK hashtag that signified his reunion with the club that sold him in 2012.

More remarkable still was an online music video released by United’s kit sponsor Adidas that featured Pogba and the grime star Stormzy. The video, which quickly went viral, represents a fusion of music, sport and lifestyle marketing as it casts Pogba as a hip-hop star, dancing to Stormzy’s rap. It also confirms that social media ‘influencers’ such as Stormzy, who has 290,000 YouTube subscribers, are now front-and-centre in the biggest sports marketing campaigns.

Early data suggests that this huge marketing effort achieved a comparatively large impact. Social media monitoring company Brandwatch reports there have been over 153,000 mentions of the Pogba transfer since it was officially announced. This compares to 38,000 mentions of Manchester City’s acquisition of John Stones from Everton, which was announced on the same day. Over 12,000 of the Pogba mentions also referred to Stormzy or Adidas.

Meanwhile data from the Brandtix sports index shows that Pogba’s personal brand value rose by 13% this week. It also finds that Pogba acquired over 900,000 new social followers in this week alone and that of his total social fan base of 14 million, 2.3 million of those came in the last month. This appears to tally with United’s attempts to build up Pogba as a brand in his own right, thereby increasing the opportunity for endorsements for both player and club.

The Adidas video featuring Stormzy underlines the need for sponsors to be increasingly fleet of foot when activating campaigns around breaking news. Adidas’ director of sports performance Ben Goldhagen tells Marketing Week that the video was created using existing footage of Pogba, who as an Adidas-endorsed athlete had appeared in a recent campaign video for the brand. Adidas shot some new content with Stormzy in the same style and merged the two in post-production with an original track from the rapper.

“Our content strategy very much focuses on scenario planning and make a few educated guesses when it comes to the news agenda,” he says. “This allows our reactive content to be real time and ready to go when the news moments finally happen.”

Goldhagen also confirms that social media personalities are increasingly important to the way that Adidas thinks about sports marketing. “This is definitely indicative of how we would like to activate these moments moving forward – combining the best of our social influencer audience with our players in content that is edited in such a way [as] to showcase them side by side in the eyes of the audience,” he says.

Max Barnett, global head of social at Nielsen Sports, believes that the Pogba unveiling is indicative of the extent to which commercial factors now determine the marketing around a star player. “Adidas are looking at Manchester United as a global marketing platform to achieve their goals, so therefore it makes absolute sense [for United to announce the Pogba deal] in the middle of the night where you are hitting key markets for Adidas – be it the US at the tail end of the day, or Asian markets as they are waking up.”

Barnett also suggests that the Stormzy video was intended to help both United and Adidas reach a young, lifestyle-oriented audience on social media, rather than a dedicated football fan base. Nielsen recently launched a new social valuation product aimed at helping sport sponsors understand the media value of their social presence.

“Pogba is not just a fantastic player – he also has that lifestyle element to him,” says Barnett. “If you think about who are the distributors of this content, you’ve got Manchester United, Pogba himself and Adidas – and then also integrating Stormzy into the content widens the net and the distribution of that content, making it go even further.”

Return of the player brand?

The marketing around Pogba’s transfer suggests that Manchester United are trying to revive the idea of individual player brands who are highly marketable outside of just football. The club has arguably not had a player of this stature on its books since Cristiano Ronaldo and before that, David Beckham. The recent signing of Zlatan Ibrahimovic, who has carefully crafted his personal brand during a long football career, adds weight to this notion. 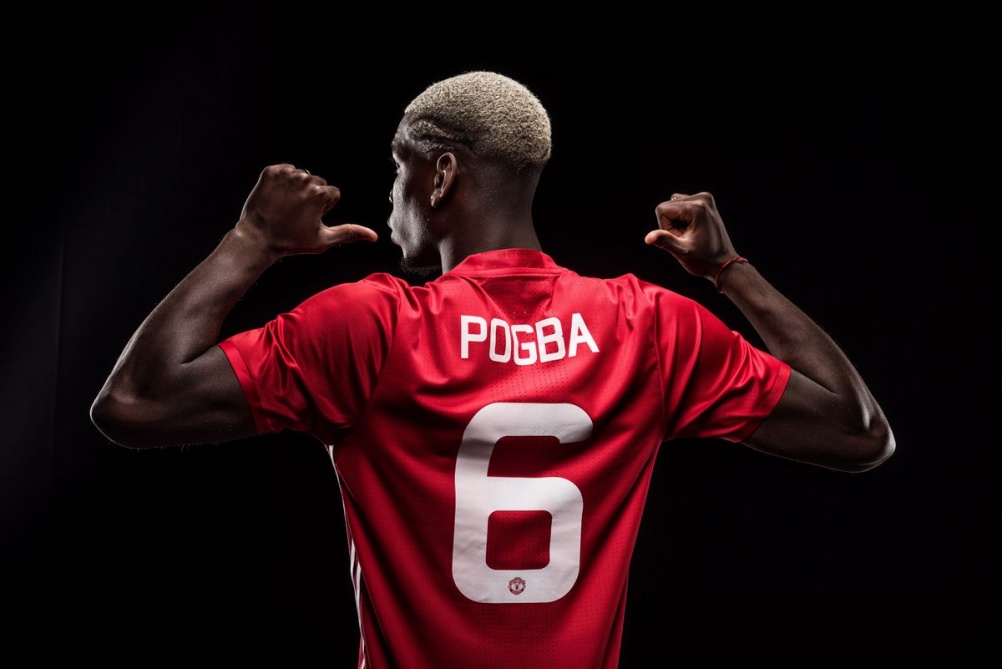 Antony Marcou, CEO of media rights group Sports Revolution, believes that football performance remains top-of-mind for a club like Manchester United, but that branding opportunities dictate the way transfers are presented. “The footballing side will always run things, because there’s so much money from the broadcasters with Champions League qualification and so on,” he says.

“Commercial will never override that, but the commercial team at Man United can try to monetise it. It’s an opportunistic way of saying ‘we’re signing superstars, so let’s [monetise] it’.”

However, Marcou also questions whether Pogba has yet earned the right to consider himself a powerful brand on the same scale of Beckham or Ronaldo. At the age of 23 and with the world’s biggest transfer fee behind him, Pogba has much to prove to both Manchester United and its sponsors in the months and years ahead.

“I hear all the noise about Pogba, but I just don’t get it yet,” says Marcou. “He’s a fantastic footballer but he has to do it at the highest level at Manchester United. Then you can build that celebrity in your own right.”